Sometimes Standup Comedy Turns Funnier When Dealing with a Heckler 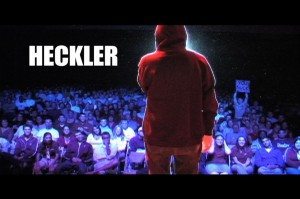 Standup comedy can be a brutal way to live sometimes when having to deal with hecklers. If you’ve ever attended a standup show, perhaps you’ve seen hecklers sitting next to you who’ve had one too many try to get a rise out of the comedian on stage. And perhaps they were quickly burned when the comedian managed a blistering comeback.

But is that really the best approach to dealing with hecklers in the crowd? If you ever attend a standup comedy show here at RISE Comedy Playhouse, we urge you to take a look at how our comedians handle hecklers to learn a few things. Yes, there may be some hecklers here considering we do serve drinks. You may notice that each comedian approaches those people from a slightly different perspective based on their personal style.

Letting the Heckler Shoot Himself in the Foot

MTV recently posted some video clips showing how certain comedians handle hecklers. In a few of those videos, you see examples of the defense plan or merely letting the heckler put himself in his own place. Some comedians love doing this by engaging the heckler for a few minutes and letting that person trip over their own verbal mistakes. When that happens, the heckler realizes he’s lost rather than gaining the upper hand.

It takes quick thinking and skill to see this work out right. You might see it in action on one of our standup comedy nights.

Holding Back Until the Right Moment

A heckler can sometimes disrupt an entire standup comedian’s act and may require turning the whole show toward the heckler for unexpected comedy. The late Mitch Hedberg was a master at that as seen in a video example from the MTV link above. Regardless, Hedberg went for the jugular. Some comedians prefer to hold back and address a heckler when it’s just the right time. Those comedians may be carefully taking in every word so a perfect comeback can be comedic gold.

If you see a comedian here who’s holding back against a heckler, give it a little time. You might have a chance to see how this technique can work better than any other.

Interacting with a Heckler On Stage

Comedians that have a little bit of improv ability on their side might bring a heckler up on stage and turn it into an unexpected comedy twist. In fact, those with improv experience may actually feed off something unexpected rather than the more scripted elements of standup comedy.

You might be in for an uproarious night if one of our comedians takes this approach. The comedic material may also end up much funnier than anything that was originally written in the script.

Addressing Hecklers Before They Begin

Some comedians sense there may be hecklers out there before they even come out on stage. In fact, it could turn into a comedy routine on its own by addressing how they aren’t afraid of a heckler. Bernic Mac did this once in a Def Comedy Jam clip and had the audience in stitches.

Of course, we want to prevent anyone from getting hurt if there’s any confrontations. A skilled comedian will keep it light and not be overly offended by hecklers to a point where the comedian becomes angry. No one wants to see a comedian turn livid rather than use comedy to his or her advantage.

We prevent anything like that from happening here at RISE Comedy Playhouse. Our comedians understand hecklers can come with the territory. If you happen to have one in your audience, just sit back and watch how it unfolds, because it could be rollicking fun.

Contact us for our next standup comedy showtimes into the new year.