Vaudeville And Burlesque: The Comic Origins of Classic Striptease 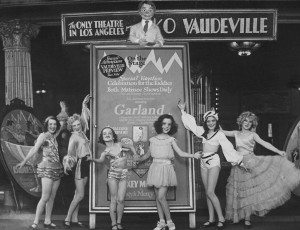 Today, most audiences would define burlesque as a provocative comedy show performed by liberated young ladies in vintage feathers and corsets. Go back a couple generations, and the term is synonymous with striptease, the only titters erupting from tipsy, excited patrons. However, the interpretation best remembered can be traced back to vaudeville: traveling variety shows featuring comedy, music, and when attendance needed a boost, burlesque.

According to The Concise Oxford Companion to the Theater, the term was conjured from the Italian word, “burla,” meaning to ridicule, and the first aficionados of Italian burlesque referred to it as, “burlesco.” Initially, sexuality played a bit role; a work described as burlesque, either literary or live, could be distinguished by its satirical tone and bawdy content. Once the word gained popularity, it was retroactively applied to such masters as Chaucer and Voltaire.

By the mid-19th Century, co-ed burlesque shows spoofing every aspect of popular culture enthralled audiences on both sides of the Atlantic. Within a few short decades, the scantily-clad female performers became the stars. From Musicals 101’s History of Burlesque:

In the Victorian age, when proper women went to great lengths to hide their physical form beneath bustles, hoops and frills, the idea of young ladies appearing onstage in tights was a powerful challenge.

In 1868, Broadway burlesque hit, “Ixion,” earned $370,000 in its first season, cementing the fad’s popularity across the upper, lower, and bourgeoning middle class. However, the medium was soon pushed from legitimate theaters due to predictable, cyclical Puritan outrage. From there, it continued in designated burlesque clubs and occasionally as a sly, seat-filling ingredient in vaudeville’s eclectic variety shows.

The petty internal hierarchy of entertainment in the early 20th Century is dizzying to describe. Broadway turned its nose at vaudeville, considered lowbrow entertainment and too close to the freak shows that would later evolve into carnivals. In turn, vaudeville entertainers sneered at burlesque, and the male comedians working among the bubbly women in bustiers often used pseudonyms to preserve their future careers. Legends such as Bob Hope and W.C. Fields were among the many young comedians who either earned their chops working burlesque or retreated to its dark corners in times of financial strife. As the decade progressed, burlesque clubs became targets for law enforcement. According to Albany.edu’s “History of Burlesque:”

In 1942, Paul Moss, the commissioner in charge of licenses in New York City, forced the burlesque theaters to close; in response to this action the owners of the Gaiety Theater sued Moss… [a Supreme Court judge] ruled in favor of the state. Trials like this weren’t uncommon, nor were trials over anti-obscenity laws concerning burlesque dancers that the government deemed too revealing.

By the 1960s, male comedians had vanished from the burlesque stage, and humor was considered an optional portion of the act. Ten years later, the term was obsolete, and burlesque theaters were replaced by the modern strip club.

Burlesque’s current incarnation combines its comedic beginnings with the flirtatious fun that once made it a worldwide sensation. Soak in the high heels and history any Tuesday or Saturday night at the RISE Comedy Playhouse, recently voted Best Burlesque in Westword’s 2013 Best of Denver Awards. Check out our calendar for show times and a full list of events, or contact us for information on our comedy workshops or to schedule a private event.