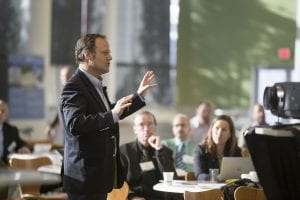 Denver, Colorado – Whether you’re delivering a sales presentation, running a marketing meeting, pitching a new product to management, or addressing your team in a weekly meeting – an improv-based Presentation Skills Workshop will help you succeed in any presenting scenario.

As an organization that creates Presentation Skills Workshops, we have a lot of experience honing in on the key skills, tips and techniques that have an immediate impact.

If you are doing some research, you’ll likely notice a common thread pretty quickly in the Presentation Skills workshops offered – all of them, at some level, will be teaching you the rules and techniques of improvisation. As an improv theatre company, these are skills that we use as the foundation for our corporate workshops (and put on display every night on the RISE Comedy Playhouse stage – Improv Theatre in Denver).

Areas we focus on in our customized Presentation Skills Workshop include:

These skills and more are covered in our presentation skills workshops. Not only will your team leave with a number of real takeaways they can use in their professional (and personal) lives, but they’ll have a lot of fun.

Contact us to learn more about our Presentations Skills Workshops and how we can design one for your team.

(Also, if you’re looking for an impactful Team Building experience, check out our popular options – Unique Team Building in Denver)

Steve Wilder is the original founder of RISE Comedy in Denver, Colorado (formerly Voodoo Comedy), operating since October 26th, 2011.  He has been teaching, improvising and performing for 28 years.  An alumnus of iO West and Second City Hollywood, Steve has performed with and studied under improv luminaries such as Michael Pollock, musical director of Second City Hollywood and the premier improv accompanist in the country; Shulie Cowen, the founder and director of Opening Night: The Improvised Musical in Hollywood; David Razowsky; Armando Diaz; Kevin McDonald; Craig Cackowski; Dave Hill; Eric Hunicutt; Karen Graci; and many many more.
All Posts

All sales are final and no refunds are permitted.  All times listed in MT.
Shows are all ages before 10:00 PM, and 21+ after 10:00 PM with valid photo ID.  Classes are 18+ unless otherwise noted.
Please check both your email inbox and spam folder for confirmation emails!

We highly recommend you are vaccinated if you come to RISE Comedy!
If you are not, you assume all of the risks involved in contracting COVID-19.
RISE will adhere to all CDC, City and State guidelines as they evolve.