Harold is known around the world, but is most notorious in the city of Chicago. Harold was created by the late Del Close [originally performed by The Committee], who is infamous for teaching improvisers like Stephen Colbert, Chris Farley, Tina Fey, Bill Murray, Amy Poehler and Gild Radner to name a few. Close taught many of the most iconic comedy minds of this generation in the windy city. Del Close and Charna Halpern are often credited to the development and implementation of Harold. The scope of Harold has spanned the nation.

Improvisation is a relatively new art form when it is broken down. Modern improvisation & performance is often credited to the minds of the Windy City. Iconic theaters like Annoyance, ComedySportz, iO and The Second City paved the way for improv. Many cities across the country have cultivated the art form and are innovating improvisation in their own ways. Chicago is the home of improv.

Del Close was a major part of the improv boom. Del created Harold and thousands of ensembles have met him, as well. Harold is an improvisation form grounded in reality, with the emphasis of elevated fellow group members.

The image below provides a visual guide to Harold. The explanation of Harold below will break it down into group games, beats and scenes. Most Harolds have two to three group games (between scenes) and 9 total scenes (three between group games). 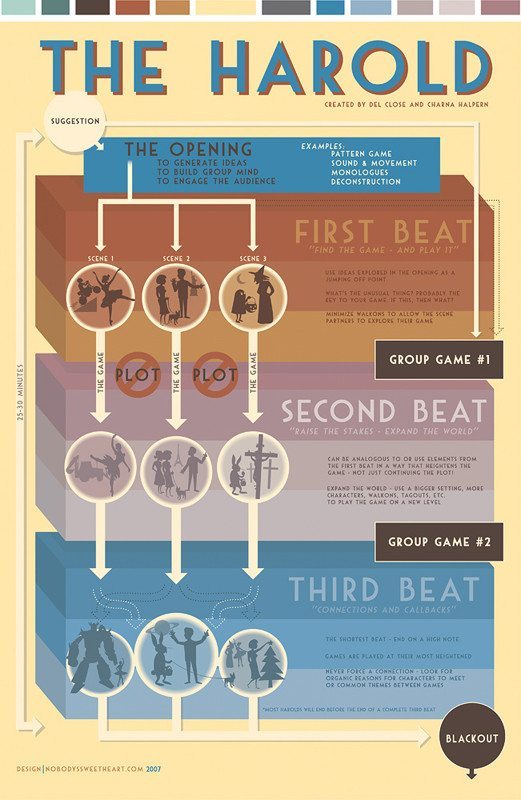 A Harold set traditionally begins with a group game based on the audience suggestion. The opening group game can be press conference, organic movements, monologues, songs- the key is to information build. The information from the opening provides inspiration for the remainder of Harold’s theme.

After the opening, actors have three scenes with two characters in each scene- scene A1, B1, C1 will occur- the first beat. These scenes should provide basic details to the scene: who, what, where, why. After the ‘1’ beat of scenes, there is another group game with the actors.

After the group-led game, there is another beat of scenes- A2, B2, C2. The ‘2’ scenes should be viewed as a way to heighten what has been established. Emotions, games and quirks are all things that can be heightened in the second beat. As the infographic displays, improvisers should not think about plot leading into these scenes. After the third scene of beat 2, the ensemble transitions into another group game.

When the group concludes the second group game, the last and third beat of scenes begin- A3, B3, C3. This is the connection beat. Characters from A, B and C scenes should interweave characters, storylines and themes. In all the beats & scenes, actors are encouraged to do improv tap-outs, elevating a trait of a particular character. Closing out the final beat of scenes can be a final group game or a blackout.

Harold is not only a national recognized improvisational form, but is also the fundamental lesson in RISE Comedy Playhouse’s School of Improv level five curriculum. The Voodoo School of Improv is the only school in Colorado culminating in Harold. For more information on classes, click here.

Harold. Give him a try.

Jon Jon Lannen is a writer, performer and instructor at the Voodoo. He loves improv, dogs and sparkling water. Learn more about him here.