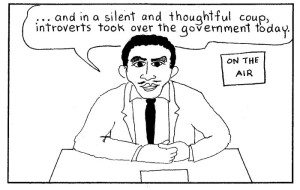 A common misconception about improv comedy is that it takes a certain kind of person to do well at it: someone who is outgoing and silly, and who loves to be the center of attention. This could not be further from the truth; improvisers in Denver and around the world come in all varieties, and the qualities that make people introverts often make them great at improv too. In fact, with just a quick glance at some of the basic ideas of improv, you’ll see that introverted people sometimes make the best – and funniest – improvisers.

Below is a list of some improv basics and why introverts excel at them.

Agree and Add Something (or “Yes, And”): The most basic “rule” of improv is to say “yes, and.” As you may have noticed by watching improv at the Voodoo or by participating in classes at one of the training programs in the Denver area, good improv requires agreement and input from each person. When they play together, improvisers agree to create with each other a made-up world, and to honor that world and each others’ ideas. Introverts are often great thinkers, able to help others invent interesting worlds that wouldn’t otherwise be thought of. They also tend to do very well in one-on-one interactions, because of their incredible listening skills. Which brings us to…

Listen to Your Scene Partner: Listening is probably the most important skill in improv. After all, how can you agree with something you didn’t even listen to? And how do you add something complementary without knowing what was said? Introverts typically prefer to concentrate on one thing – one activity, one person – at a time, observing and analyzing before they jump in. This is often very helpful in an improv scene, because too often people let nerves or excitement get in the way of the important tasks of pausing, observing and listening to their scene partners.

Work for the Team, Not for Yourself: In the case of teamwork in improv, the extrovert vying for the limelight often pales in comparison to the introvert. Not being preoccupied with a quest for attention, introverts open themselves up to be immensely supportive to their scene partners. Introverted improvisers can often be found filling much-needed roles as supporting characters, side-line sound effects and even scenery or props within a scene. These may sound like unimportant roles, but they can sometimes make or break the accepted reality of an improv scene. Think of your favorite show you’ve seen at Voodoo; was it just two people standing around talking, or were there other team members enhancing the scenes by describing or becoming parts of the characters’ environment?

Focus on the Relationship: In improv, the relationship between characters should almost always be the main focus of the scene. Most often, this involves two characters discussing an issue, a life event or other topic. Many introverts are known for being more comfortable in one-on-one situations like this. Their preference for one-on-one interactions likely gives introverts a leg-up over extroverts, who may be comfortable in big, chaotic group scenes but can feel uneasy in deep two-person scenes.

Stay in Character: Introverts are great at focusing. And in improv, just as in any other form of theater, focus helps keep the actors in the mindset and headspace of their characters. This commitment to character bolsters the realism of the improv scene and allows each improviser to portray believable characters with individual quirks, needs and perspectives.

Anyone can do improv, and anyone – no matter if he/she is introverted or extroverted – can be great at it. Next time you’re watching an improv show at the RISE Comedy Playhouse, take notice of the different improvisers to see which skills each one excels at and guess who might be an introvert. Our guess is it’ll be some of your favorite players. Contact us for information on upcoming shows