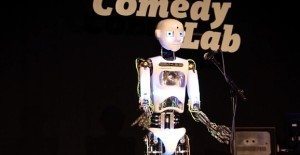 Standup comedy has always been a very human art form that may seem robotic in the delivery of one-liners to less perceptive people. Even if standup has evolved into far more than just vaudevillian setups and punchlines and into lengthier ruminations on life, it shows us the human experience like nothing else. That’s why it might seem odd to think of artificial intelligence ever taking on an art form that depends strictly on the perceptive experience of human beings.

What made this interesting is that it went beyond being an interesting photograph of a robot reciting jokes into a microphone. It was really intended as a study into whether a robot can outperform a human and what’s needed to create a performance that captures audience attention.

Will RoboThespian Become a Template for Future Standup?

With the name of RoboThespian, you know the British had to be involved in this strange experiment. We all know the birth of comedy mostly came from the Brits anyway, and we continually steal from them in the comedic innovations they’ve created. However, have they started a new trend in robots becoming new stage performers and even someday doing standup comedy?

Despite being controlled backstage, the robot is alarmingly sophisticated in how it recites jokes and in the reaction it makes to audience feedback. It even adapts its comedic script based on audience reaction, which is artificial intelligence taken to alarming levels.

The question is whether Americans would ever want to see this implemented someday to a point where the robot operates under its own accord. With artificial intelligence increasing to near HAL 3000 levels and physical robotics advancing, don’t be surprised if entire shows will soon have robots performing on stage. This may even include new standup comedians who happen to be robots.

Then again, with RoboThespian above being merely an experiment, it may take only a mad scientist to turn robots into working standup comedians. There wouldn’t be any point either when standup comedy is also cathartic to human beings. It’s part of the symbiosis of giving back as well as providing something meaningful for one’s self.

Besides, the human experience is too complex for AI to ever understand completely. That particular nuance is something audiences can pick up on, which means standup comedy will likely continue to be the most human art form there is.

Come see our very human standup and improv comedians here at RISE Comedy Playhouse. Contact us to find out how to purchase tickets, and see our upcoming schedule.