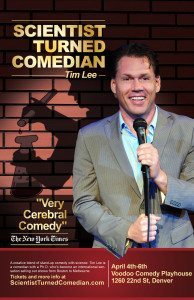 Standup comedians use many of the same principals scientists use to form their craft, in that comedy routines are based on observations and trial and error.  The ideas are tested over and over again and sometimes discoveries are made.

Perhaps that is why so many comedians over the years have been intrigued with scientists.  Here are a few kindred spirits, sharing science and a few laughs:

George Carlin (1937 – 2008) talks about his fascination with science, including the cycling of the universe and how scientists estimate how long the earth has existed.  He says,

Ricky Gervais, Stephen Merchant and Karl Pilkington are on the Science Channel, questioning everything, especially when doctors ask them to drop their pants.

Neil deGrasse Tyson will blow your mind with Stephen Colbert on Colbert Nation.  deGrasse, an astrophysicist, says about science,

…it’s true whether or not you believe in it. That’s why it works.

Bill Maher and Bill Nye the Science Guy talk about creationism, how some ideas are counterintuitive and how climate is different from weather,

…if we raise a generation of students who is scientifically illiterate, we’re not going to have the next iPhone….

You may not recognize him at first, but Tim Lee stars in this video as Charles Darwin.  In it, he schools Kirk Cameron on evolution in a crafty rap,

Where’s the croc-a-duck or the duck-a-dile? I’ve destroyed your theory with the perfect smile.

Fun fact:  Tim Lee’s middle name is Xtreme.  His dad wanted him to be a stunt man, but he opted for a life in science and then standup comedy instead. Read more about Tim Lee and his unique brand of scientific comedy at his website.

Another fun fact, Tim Lee will be at RISE Comedy in Denver on April 4, 5 & 6.  Contact us to purchase tickets online and to find out about other goings on.