Improv Comedy and Kids: Can They Learn How to Better Deal with Life Using Improvisation? 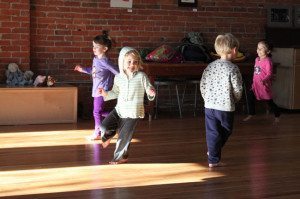 We constantly hear about the differences between standup comedy and improv comedy, though we seldom hear about how either one can be used in the real world. While being a standup comedian can probably help you use quicker wit or help you be more observational in the real world, the same can be said of improvisation. And improv can go much further than that when you teach it early to kids.

In Broomfield, Colorado, they’re offering just that through an innovative new program teaching improv skills to kids. The classes are being taught in the city’s public library where kids can gather and turn loose into a stream-of-consciousness quirk fest. While some overly serious-minded people might find the teaching of this improv to play up the absurd, it’s really teaching kids a considerable amount of life skills.

While kids may suffer from various problems, lack of confidence is certainly one we hear about often enough. Giving kids the ability to tackle the world head-on without worrying about outcomes is a valued skill that’s being taught in this improv class. At the same time, it helps shape a child’s mind to think on their feet and form creative ideas on the spot.

In today’s world where thinking faster and coming up with innovation is a top priority to keep our economy going, developing the brain to think fast is essential. Even better, kids can learn a sense of humor about the world that can easily benefit them in relationships. Being able to have ready quips about situations helps alleviate stress and breaks the ice in any real world relationship.

It seems those who do improv have long been placed into a select group that sometimes get misunderstood in why they perform. Once kids learn the intellectual and comedic benefits, they’ll be able to appreciate improvisation when seeing a performance. With pop culture starting to feature more comedy improv, kids will be able to appreciate it as an art form as well as add more to the roster as possible performers themselves.

Here at the RISE Comedy Playhouse, we feature 20 different unscripted comedy shows where audience members play along willingly without perhaps knowing the skills involved. We also offer improv classes ourselves and see our attendees learn so many life skills as a result.

Yes, that means making occasional animal noises as seen in the kids from the above Broomfield improv class.

Contact us about showtimes for our improv performances. Also, ask about how you can get involved in our improv class, or what’s known as the Voodoo School Of Improv.