Legends of Improv and Sketch Comedy: The Kids in the Hall 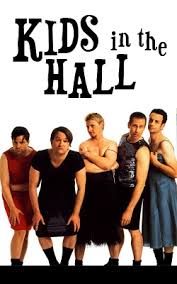 A punk rocker and a homeless man overheard at a bus stop, late fall, 2013:

It takes one hell of a sketch show to burrow so deeply in pop culture’s subconscious that it’s still being quoted twenty years later. The Kids in the Hall, a sketch comedy group out of Toronto, is best known for its corresponding TV show that ran in Canada and the United States in the late ’80s and early ’90s. At the time, and for a few years later as reruns continued on Comedy Central, “head-pinching” turned into a game for the show’s eclectic cult audience of young grungers (’90s hipsters), gays and lesbians, and anyone with a dark or whimsical sense of humor. While the TV show’s existence was spearheaded by Saturday Night Live’s Lorne Michaels, Kids in the Hall was the “cooler” sketch show – edgier, stranger, and unfettered by the live format of SNL.

The Kids in the Hall roster – Kevin McDonald, Dave Foley, Bruce McCulloch, Scott Thompson, and Mark McKinney – came to fruition in 1985. McCulloch and McKinney had a working relationship with Michaels which eventually led to their five-year run on CBC, HBO, and CBS. While most sketch shows lampoon current events in an immediate sense, Chevy Chase as a chronically clumsy Gerald Ford, for example, or Tina Fey as a terrifyingly accurate Sarah Palin, The Kids in the Hall took a broader view, as if they were standing ten paces behind the news of the day and munching popcorn. In ’96, they devoted a feature film (Brain Candy) to the concept of antidepressants, exploring fame, the nature of sadness, the pharmaceutical industry, and drug culture astutely against a backdrop of delightful nonsense and absurdly well-developed running gags.

Their talent for improv and audience engagement is best documented in 2002’s Tour of Duty, in which the troupe revives many of the show’s popular characters to appreciative howls from the crowd. In a bit that’s equal parts flamboyant satire and psychedelia, Scott Thompson’s Buddy Cole shares his off-camera escapades, revealing a tawdry affair with Uday Hussein while twirling a martini. Kevin McDonald’s mildly evil scientist is once again frustrated by Dave Foley’s Hecubus, who handles a wardrobe malfunction with a line that probably shouldn’t be repeated on this blog, but had McDonald breaking and the audience in tears.

Denver fans of the troupe are in luck; Kevin McDonald will be arriving at the Voodoo on February 28 for his solo show, “The Couch.” He’ll be sticking around March 1 for an unscripted show with Denver’s finest improvisers and will host a class on writing and performing sketch comedy March 1-2. For more information, contact us, or check out our calendar for a full list of events, including burlesque, karaoke, and improv galore.