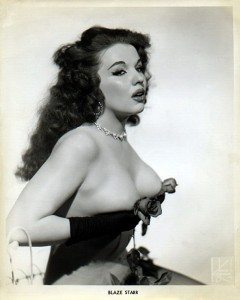 These days, most audiences know burlesque as funny, seductive live entertainment performed by women reveling in their sexuality while donning elaborate vintage costumes. The telltale feathers and garters reference the twilight years of burlesque’s first run of popularity, after striptease became the main event, and burlesque houses became synonymous with modern strip clubs.

Naturally good-humored, the legendary Blaze Starr furthered burlesque’s comic precedence nearly a decade after laughs became secondary to legs. Born and raised in West Virginia, Blaze sauntered into Baltimore’s burlesque scene in the mid-’50s while still in her teens. A giddy dream inspired her trademark “exploding couch number.” Blaze describes the act to the LA Times:

I had finally got my gimmick, a comedy thing where I’m supposed to be getting so worked up that I stretch out on the couch, and — when I push a secret button — smoke starts coming out from like between my legs. Then a fan and a floodlight come on, and you see all these red silk streamers blowing, shaped just like flames, so it looked like the couch had just burst into fire.

Starr found herself in a real life comic burlesque when she became involved with the eccentric and notoriously theatrical governor of Louisiana, Earl Long. Their romance began in 1959, and rather than a tawdry affair, Starr recalls a sweet love story. In 1989, she told People:

Earl came [to the club] every night. Finally I did go out with him, and he really started to get to me. He was so kind. We dated for two months before he made a move.

The governor happened to be married, a fact glazed over in the 1989 biopic, Blaze. The Paul Newman film also overlooks Blaze’s dalliances outside her gubernatorial tryst, namely with President-To-Be John F. Kennedy. From the same article:

One night before he was President, Jack Kennedy came to the club and watched the show from the balcony with Jackie. I had met Jack in Washington before he married… But neither of us let on that we knew each other when Earl made introductions. That night we all went to the Roosevelt Hotel. Jackie left, and while Earl was elsewhere, I wound up having a quickie in a closet with Jack.

Long passed away the same year his fling with Starr began, at the end of a long-shot Democratic primary run for Congress. Blaze continued to strip until 1985, after an illustrious career including work with Irving Klaw, best known for his black and white photographs of Bettie Page, a profile by art photographer Diane Arbus, and several starring roles as herself in a string of ’60s sexploitation films.

Starr went on to purchase the club where she performed in her youth, the iconic Two O’Clock Club in Baltimore. Now 81, Blaze is rarely seen at the club, but memorabilia from her salad days line the establishment’s walls.

Blaze Starr’s full story is documented in Blaze Starr: My Life as Told to Huey Perry. Sadly out of print, the book can still be found used in paperback and hardcover.

Ready to check out burlesque‘s latest incarnation? Grab a drink at the RISE Comedy Playhouse on a Tuesday or Saturday, and enjoy an evening of girls, giggles, and garters, recently voted Best Burlesque in Westword’s 2013 Best of Denver Awards. Take a look at our calendar for show times and a full list of events, and feel free to contact us with any questions or comments.