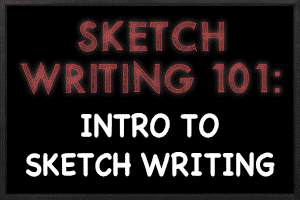 In this online version of our sketch writing program, you will get the opportunity to learn how to write different styles of sketches, how to re-write and get notes back by the instructor Nick Armstrong to craft a well polished sketch. We will work on character sketches, premise based sketches, parody and more! This 4-week class will focus on a variety of sketches. You will learn how to write with others and you will also learn to write solo sketches. This class is being offered online on ZOOM. You will write in class and also turn in sketches for notes and you will learn how to re-write. Even though we are online, you will read sketches and pitch them to the instructor and the class and we will all work together to make each to the sketches amazing and polished. It’s almost like being in a real sketch writing room.

What you’ll get out of this Online Class:

Nick Armstrong is managing director and co-owner of RISE Comedy.  Nick is an Actor, Improvisor and Writer living in Los Angeles, CA. On TV Nick has been on the Emmy-Award winning shows The Office and Grey’s Anatomy. He has also made appearances on Jimmy Kimmel Live, New Girl, Stan Against Evil, Brooklyn Nine Nine and Parks and Recreation. He has also sold and written TV shows to numerous networks including TruTv, A&E and more. Nick has trained at The Groundlings and iO West. He is an alum of The Sunday Company at the Groundlings and currently performs at the M.I.’s Westside Comedy Theater with LA’s Critically Acclaimed Harold team King Ten and County Line. He has also taught improv at iO West, The Groundlings, The Pack Theater and has done workshops all over the world. Nick is also the Camp Director and Founder of Camp Improv Utopia a a 501(c) (3) Non Profit improv retreat for grown ups. He is also one of the founding members of the The Improv Network.