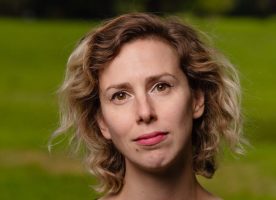 Find different and fun ways to create and inhabit characters. In this class, you will put those characters into scenes to see how they play out!

Katy Schutte was one of the UK’s vanguard of long form improvisers. She performs and teaches all over the world, is head-teach for Hoopla and Co-Artistic Director for The Maydays in the UK. Katy has been one of The Maydays since 2004, she is half of legendary sci-fi improv duo Project2 and author of The Improviser’s Way: A Longform Workbook, which is published by Nick Hern Books.

Katy performs with Knightmare Live and makes acclaimed theatre and comedy shows such as Schutte the Unromantic and folk horror play Let’s Summon Demons. She is also a contributing writer for Cards Against Humanity.