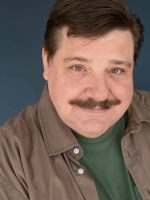 I’ve been studying, performing, and teaching ‘Game of Scene’ technique for over twenty years.  Different teachers and directors have given me different approaches as to finding and playing the game.  In this class we will explore different ways to find and play game.  Premise, organic, character, genre, learn to play them all, find which way works best for you.

Billy Merritt has taught, performed, and directed at the Upright Citizens Brigade Theater since it’s inception in the late 90’s in New York, moving to LA where he does the same.  He’s been a founding member to legendary improv groups The Swarm and The Stepfathers at UCB-NY, as well as mildly legendary The Smokes at UCB-LA.  He wrote a book with Will Hines about his teaching theories Pirate Robot Ninja: An Improv Fable.  Billy has made appearances on Reno 911, Park & Rec, The Conners, and Adam Ruin Everything to name a few.  His VO credits include Steven Universe, Family Guy, and various commercials that no one cares about except for his mother who is very proud.